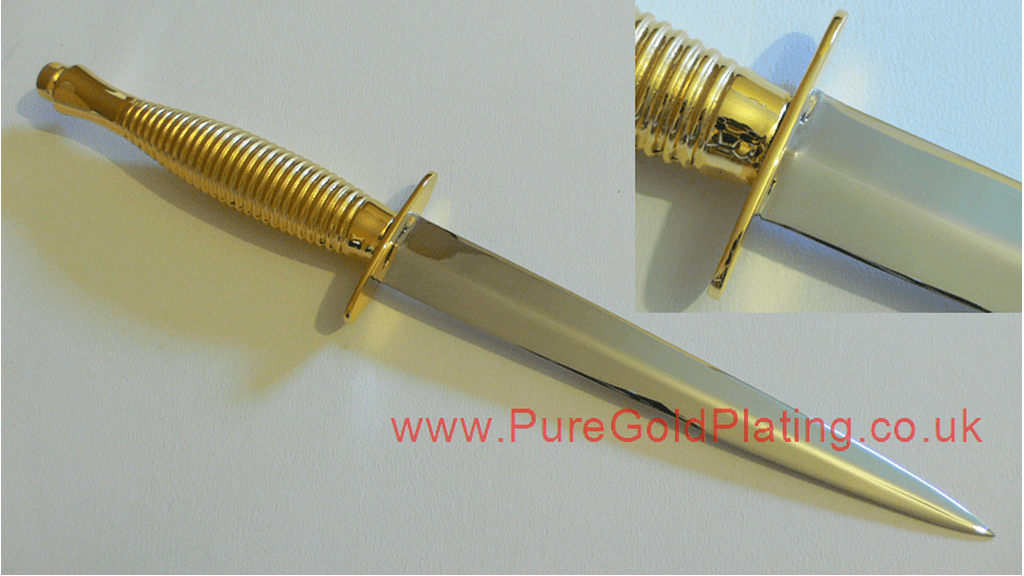 The Fairbairn-Sykes Fighting Knife pictured above shows the type of work we can do and the finish we can achieve. The image shows the completed knife which has had the blade thick nickel plated with a 24 carat gold plated grip.

The knife is double-edged with a foil grip developed by William Ewart Fairbairn and Eric Anthony Sykes in Shanghai before World War II. This was made famous during the War when issued to British commandos, including the SAS. The knife is so symbolic of British Commandos that a solid gold Fairbairn-Sykes Fighting Knife is part of the commandos’ memorial at Westminster Abbey. The knife features in the insignia of the Dutch Commando Corps, founded in the UK during WWII, the Australian 2nd Commando Regiment, and also the British Royal Marines.

What is selective gold plating? A simple answer is the…

Rose gold, also described as red or pink gold, is…

What Is Gold Plating

What is gold plating? Gold plating is the method of…

Archives
Categories
Recent Posts
Follow Us
Follow us on social media to stay on track with the latest news.
Search
© Copyright - Pure Gold Plating - All Rights Reserved 2008 - 2022
Back To Top